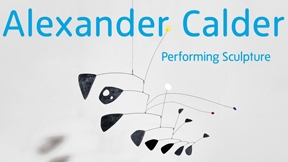 There cannot be a happier exhibition in Britain than Tate Modern’s Alexander Calder: Performing Sculpture. Its hanging, hypnotic dramas of twisted wire and cut metal soar and swoop, float and dazzle, with a joy and lightness of spirit magnificently compacted into simple forms and pristine colours.

The central gallery alone, at once energising and contemplative, contains more than a dozen flights of unpredictable, weightless movement. A cascade of white discs, “Snow Flurry”, was inspired by a blizzard. The revolving red, gold, black circles in “Gamma” evoke celestial bodies. “Bleriot” is a rudimentary plane buoyant in a breeze. Black-painted metal leaves looped from wire branches glide above us in “Vertical Foliage” and “Antennae with Red and Blue Dots”.

“Calder’s art is the sublimation of a tree in the wind,” said Marcel Duchamp, who also coined the term “mobile” to describe the suspended forms swayed by flows of air with which the American artist revolutionised sculpture between the late 1930s and the 1960s.

Direct and tough but also delicate and ethereal, Calder’s are the most immediately accessible inventions in all modernism: I have never met anybody who doesn’t like them. Their technical complexity — an exquisite system of weights and counterbalances — is masked by a straightforward expressiveness that delights and surprises. A tram is dreamily slowed to a flow of biomorphic shapes in “Streetcar”. Spheres move like planets along curved wires in “A Universe”, an abstract vision of the cosmos, which held Albert Einstein transfixed for the full 40 minutes of its cycle when it was first shown at MoMA in 1943.

Born in Pennsylvania to a family of sculptors and engineers, Calder began his career as a toy designer in Paris in the 1920s. It is an irony that the great large-scale works of his maturity spawned a booming postwar business in ubiquitous children’s mobile decorations. So to viewers today, it is hard to imagine how radical Calder seemed in the 1940s: the bold use of industrial materials, the veering between abstraction and forms referencing nature or urban life or adventures in space, the abandon with which formal control is relinquished for a work to “catch any stray wind”, as Calder put it.

“A general destiny of movement is sketched for them, and then they are left to work it out for themselves,” wrote Jean-Paul Sartre in 1946, co-opting Calder as an existentialist. “Calder suggests nothing. He captures true, living movements and crafts them into something. His mobiles signify nothing, refer to nothing other than themselves. They simply are: they are absolutes.”

In 1948 Sartre went on to define Giacometti’s art, too, as “the search for the absolute”. The two giants of 20th century sculpture share key elements — wiry, fluid forms, a concern with movement and by implication the provisional and uncertain — but where Giacometti speaks of European postwar angst and desolation, Calder is the American voice of infinite, crazy possibilities.

In a multi-room preamble to the grand displays of the mobiles, Tate traces the steps by which the young American who in 1926 charmed avant-garde Paris with his miniature “Cirque Calder” — figures made from fabric, cork, buttons — became in the 1940s an innovator to rank with his friends Joan Miró and Piet Mondrian. Early “drawings” in wire of acrobats, dancers, galloping horses, already show an interest in transparency and technical ingenuity, as well as Calder’s life-long fascination with the circus, not for “the daringness of the performers nor the tricks and gimmicks [but] the fantastic balance in motion that the performers exhibited”.

Wind-up wire pieces such as “Goldfish Bowl” (1929) — sadly, like many works here, too fragile to be activated for the fish to swim and dart — testify to the obsession with movement Calder brought with him on an initial visit to Mondrian’s studio in 1930. Mondrian’s geometric abstraction was a revelation, but Calder reckoned the rectangular shapes might “constipate movement”.

They prompted him to ask “Why must art be static? How fine it would be if everything moved . . . The next step in sculpture in motion.” He began to experiment with abstract, painted motorised wood and wire constructions — “Machine Motorisee”, “Black Frame” — embodying the mechanical processes implied in cubist and futurist paintings.

Next, in 1936, came a group of works where plywood painted in Mondrian primary colours form the background to hanging curvilinear shapes cut in metal: abstract painting in kinetic, three-dimensional form.

The ones pictured here — “Red Panel”, “Form Against Yellow”, “Blue Panel” — have rarely been seen in public, and never together. They constitute a landmark in Calder’s development: although how heavy, laboured, they are in contrast to the free-floating forms of the mobiles that soon followed.

Indebted to Miró ’s biomorphic forms, these take their overall compositional structure from “the system of the universe”, Calder explained, for “the idea of detached bodies floating in space, of different sizes and densities . . . some at rest, while others move in peculiar manners, seems to me the ideal source of form.”

Several untitled early mobiles playing out arrangements of globes and suns, crescents and stars in bright/dark hues, as well as the stabile constructions “Morning Star”, “Constellation”, “Constellation with Two Pins”, have a lustre recalling what Calder remembered as his “cosmic epiphany”: a sea voyage where, off the Guatemalan coast, he saw “the beginning of a fiery red sunrise on one side and the moon looking like a silver coin on the other”.

American confidence and freedom (both spatial and from shackles of tradition) now fused with Calder’s Ecole de Paris influences to create a new approach to sculpture based less on mass and volume than on light and open space, and chancy, performative elements. The painted aluminium and shiny brass “Red Gongs” installed here above a ventilation duct swings marvellously, casting ever-changing shadow pictures on white walls. A star loan, the 3.5-metre “Black Widow” from São Paulo’s Instituto de Arquitetos, leaving Brazil for the first time, has an upper body of deep black wings — it seems to me to resemble a flamboyant bird in flight rather than a spider — with circular perforations that channel light, and a swinging playful tail whose gentle motion eases its daunting impact.

“To most people who look at a mobile, it’s no more than a series of flat objects that move,” Calder commented. “To a few, though, it may be poetry.” Lyricism courses through this lovely show, as well as optimism, wit and visual seduction rooted in formal perfection: a modernist pioneer, light and fresh for our age of spectacle and entertainment.