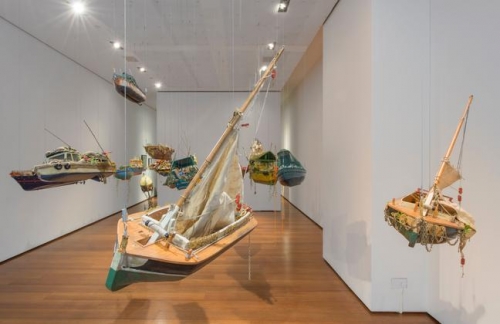 Edward Tyler Nahem is pleased to present Hew Locke’s first solo exhibition with the gallery. The Anglo-Guyanese artist who lives in Great Britain and spent his formative years in Guyana, consistently explores themes of race, colonialism, displacement, the creation of cultures, and the visual codes of power, drawing on a deeply personal visual language.

Hew Locke: The Wine Dark Sea will present new works by the artist that highlight Locke’s acclaimed sculptures of boats, which occupy an important place in his personal iconography. ‘The wine dark sea’ is a description of the Mediterranean used by Homer throughout The Odyssey, and the phrase is repeated by Derek Walcott in his epic poem Omeros set mainly in the Caribbean, and referencing characters from The Iliad. Locke’s visual poem likewise points up the universality of many of our experiences.

This new series of thirty-five vessels of varied scale and hues will be suspended from the ceiling, creating a flotilla at eye level. Incorporating contemporary and historically resonant vessels - clippers and container ships, battleships and lifeboats - Locke will create a spectacular sculptural environment. Locke’s work articulates this environment as filled with hope, potential prosperity and gratification, as well as despair, anguish, and suffering. This narrative resonates deeply with the tides of refugees fleeing to the sea from war, oppression, and poverty, but also with those viewers for whom migration and displacement are part of family history. A ship is a symbolic object; vessel of the soul, means of escape, both safety and danger. According to Locke, “We’re all floating on the same ocean. As a child and young man I sailed the Atlantic. At sea, a twist of fate can send a super-yacht down - it can be an equalizer between rich and poor.”

Locke’s multi-media practice includes large-format installation, painting, sculpture, photography and tapestry and has been called a “’mental Moulinex,’ or food processor, into which experiences are tossed, mixed around, and transformed into chimerical creations.” (ArtNews, April 2014). Related works include his celebrated For Those in Peril on the Sea, 2011, in the collection of the Peréz Art Museum Miami and The Tourists, 2014, an installation commissioned by the Imperial War Museum for the museum ship HMS Belfast, London.

Born in Scotland, Locke grew up in Georgetown, Guyana before returning to Britain for his university education. His work has been exhibited around the globe, most recently at the Tate Britain and in Runnymede, UK as the main commission to celebrate the 800th anniversary of the signing of the Magna Carta. Locke's work is additionally represented in the collections of Tate Gallery (UK), the Brooklyn Museum (New York), the Kemper Museum of Contemporary Art (US), Kansas City Collection (US), the RISD Museum (Rhode Island), Victoria & Albert Museum Drawing Collection (London), and the British Museum (London).